There and back again - E-biking to SFU

Earlier this week I returned my borrowed e-bike for the 2nd time and so ends my experiment to determine what my future with e-bikes would be. 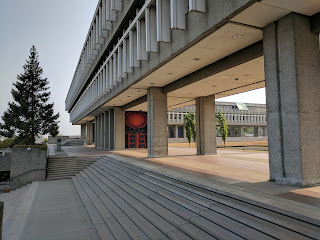 I tried to approach it scientifically.  I tend to be a bit obsessive with all things transportation related and want to be practical and not driven by emotion if the "right choice" for cost, time, and convenience is not what I expect.

With this installment of the Momentum Mag E-bike Library checkout I had a plan ready:

SFU and back:
SFU is about 20km from my home, but more importantly on a mountain. By car it would be a 40 min commute in good traffic conditions and by normal bike close to 1.5 hours (also 1.5 hours by bus).  In other words, further than I ever want to commute on a daily basis.

The first 10km of my journey was my old commute (see below): flat, and one of the best routes fro non-stop travel in the lower mainland.  Once you hit Boundary though serious undulating hills begin and then there is the mountain itself.

For part 2, all I could think was that I was happy I had electric assist,.. a nice route but hilly. Unfortunately this is when I began to regret using too much assist for the first 10km. I had used 25% of my battery by the foot of the mountain. I had to use mode 3 and 4 the entire ride up.. and though it was thrilling to be able to cut through that distance so fast,.. I got there with 42% battery left. Seen the movie Gattica? I had not budgeted for the full trip home....

I plugged in to ensure I didn't get stuck but the 125km range clearly is misleading,.. that could only be possible in optimal flat conditions or seriously mindful riding.  I also took this chance to test the controversial Bionix ability to charge using negative settings on a steep downhill. Many poeple say this is a myth but I did manage to gain 3% back by descending the mountain.  Not much, but tell that to someone 1% short of home!  I got home by hypermiling it,.. but I might aswell have been riding a non-assisted bike for most of it.

My old commute(s):
I also took the time to ride 2 of my old commutes because I knew exactly how long they took on my regular bike.  As everyone probably knows,.. bikes usually win out on most shorter commutes because there is not walk to the bus stop, parking lot, or even car,.. it is all motion and bike paths tend to be designed for less stopping.
My last job was right on the Central Valley Greenway route so mostly flat and straight for about 10km (and less than half the lights of the equivalent car commute).  I was shocked that even with hitting the lights pretty well, a 35 min ride only dropped to 27min. I felt like I was flying but I think only the hills were significantly faster.
My previous commute from the Fraser River up Ontario was way faster however.  Something like an hour cut to 35 min. The hills are where this matters,.. clearly.

Would I buy an e-bike?
Despite the high entry price, yes, but not right now. I think it is inevitable when I'm older and can't cover the same distances I can now.  Also, I'm not that fit these days so reducing my exercise effort is probably not the best idea.
What might change that is a medium-long but hilly commute to a job.  A 4k bike could be worth the investment if you are no longer taking a car to work 5 days a week.  To make it work, you'd need:

I should also mention something else. I have been nursing a messed up knee. The ebike allows you to take a ton of pressure off of your joints when you are starting from a full stop.  It allowed my to get exercise for the last 2 weeks.. where I otherwise couldn't.  This cements my above comment about when I'm older.

If the price of the bikes were to drop, I could imagine buying sooner.

Lastly, make no mistake about it... these are FUN. If battery tech changes and you could do a 2 day camping trip without charging,.. I could also see buying sooner.