The Granville Connector: "West+" all the way.

The City of Vancouver, after many years of alluding to it, have finally confirmed improvements to the Granville Street Bridge are most likely coming.  Specifically, some of the underused car lanes will be converted to make a safe crossing for pedestrians and cyclists.

I have been waiting for this for a very long time.  To me, this water crossing was the #1 glaring gap in the network of complete streets and I have been saying it for years.  To have a bridge so inhospitable to even walk across, and worse, deadly to ride,..ridiculous.  Add to that the fact that neither end of the bridge will ever be able to be anything but a bottleneck for all of those driving lanes... it was about time. Some background first. When the display suite for now almost completed Vancouver House was erected, citizens heard the first noise about a park-like channel down the middle of the bridge being considered,.. but was it just a developer's pipe dream?  For years it was silent and even the CoV website had only a few of the artist's pictures reachable deep within their pages for this concept.  It seemed as if they had backed out. In 2017, however, when Westbank put on an event near Jack Poole plaza, the Vancouver House models resurfaced as part of a display and this time I had a camera.. sure enough, I had not just imagined it.  In January 2019 it resurfaced in earnest with City Council approving the start of consultations for the what is now called the Granville Connector.

I have a selfish stake in this project.  Years ago I calculated just how far people living in a number of dense residential areas need to go out of their way to cross False Creek and into the downtown core if they live between the Cambie and Burrard bridges.  The distances are not far in a car,... but what I now know from working for a transportation based service,.. for cyclists and pedestrians it is plenty far enough to influence people making a choice to drive or not.  I live in that area (near Granville and 13th) and for me, depending on the downtown destination,.. it can be up to a 4 km detour - that is why I care.  I drive, bus and walk that bridge weekly,.. but I want to bike it and I want many more people to consider not driving to work across it.

I feel it is our duty to get everyone where they need to go in the city with the minimum movement of single occupancy cars and though the Granville Street bridge is great for buses, it is like a firewall for anything else but cars despite being the most direct line for tens of thousands of Vancouverites to the core of our city.

I joined the CoV workshops offered by the city to solicit public suggestions and feedback. To be honest, I went with the agenda to ensure that some crazy requirement didn't derail the entire project,.. as far as I was concerned a utilitarian concrete barrier running up the bridge was all I cared about.

To my surprise, during those sessions most participants wanted far more for non-drivers and the drivers understood the capacity bonanza once it was explained to them.  The city has since provided their own map, like mine above, that demonstrates that  the other 2 crossings are not enough for people located in the middle if real change is the objective (that being commuter choices). They also have put forth 6 design options,.. all far exceeding my hopes. 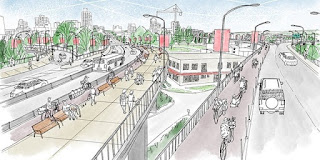 Whether or not you support any of the proposed solutions,.. if the money is going to be spent, I would would hope everyone would want the maximum utility of that investment. In my opinion, that means getting the most people to convert to walking or cycling across that bridge, and to maximize the increase in making it a tourist draw.

What has been called the "West +" option is the one that is most likely to achieve that but to understand why, you need to know about 2 things:


I have the fortune to work for Vancouver's only bike share.  The majority of the effort for our redistribution crew is dealing with the preference of riders to ride bikes down hills, but not up them.  Ask any of my co-workers and this a daily reality.  Only West + utilizes the Fir Street off-ramp to the full potential.

Why does this matter? Imagine hiking North up the to the crest of the bridge only to drop all of that elevation to go back to the level of West 4th only to climb to Broadway to pick up transit (or whatever) there.

All of the design options proposed include a safe way to cross the bridge for pedestrians, wheelchairs, and bikes, and all but 1 have a decent connection to the Arbutus Greenway.  However, only West + includes a wide enough passage along the Fir Street off-ramp which is the only part of the bridge that remains at an elevation somewhat level with Broadway.  For southbound traveling commuters starting south of Broadway (including the future Skytrain users),.. essentially a flat or downhill ride into the city core.  Northbound, no longer are you hoofing it from 4th to Broadway.. just take the more gradual gradient to the crest of the bridge, drop a bit and don't waste your effort doing it all again.

Don't believe me? Walk from the Yale downtown to the Royal Bank on Granville and Broadway... but stay on Granville.  People will ride that once and probably never do it again.  Put them on Fir.. they get unblocked sight lines, sunlight,... and realistic gradients for non-athletes to walk, roll and ride.

Some will balk at the cost (not the highest, but not the lowest of the 6 options). For whatever reason this option has an added (but IMO  opinion unneeded) widened sidewalk on the east side which I'm told increases the price-tag but there is an unlisted option to not include this... (I wonder if that is a tactic).  That would be the only way to improve on West +,.. lower the price and shrink the scope a bit.

Please do this survey (by this Friday) and make sure the city hears your voice.  It is pretty clear to me that if you took the city councilors for a walk or ride on all of these options (with no electric assist!) West + would be chosen hands down.

Walk it for yourself and remember we only get one shot at creating this unique space and making it as enticing as possible for commuters and tourists.

I know even reading this takes a ton of time and reading the CoV material more yet but spend the time, it is your city.  Help Vancouver see what New York now knows... (referring to the Highline)


Posted by Wanderunghike at 07:19 No comments: