I'm really pleased to hear that MOBI has already exceeded all expectations and hasn't even completed the pilot phase. 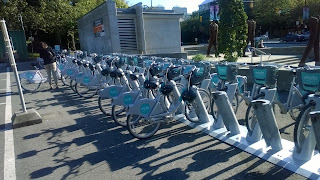 Since my last entry, we were granted access to the existing fleet and have used them numerous times.  I'm happy to report that some of my main concerns have been addressed.  Much has changed!

First off, my map HERE has changed alot since earlier,.. some key stations were added in places right where I would like to see them. Unfortunately my map is now more of a record of where a station HAS been,.. but might not be now.   This map shows all stations but what is currently open is only a subset of these.

MOBI,.. please keep going and start thinking about all the sweet cycling action to be had on the South side of False Creek.
Posted by Wanderunghike at 07:40 No comments: